So I never did get around to posting the photos of Halloween. As you may or may not recall, Halloween was actually bumped this year by official decree. I'd never actually heard of any such thing before but Connie tells me the same thing had happened the year before for some parts of Jersey. The hurricane made Halloween untenable for most towns and so they moved it to the following Monday instead. Since I had nothing better to do and I was interested in seeing the kids in their Halloween getups, I popped over to Connie and Jeff's. 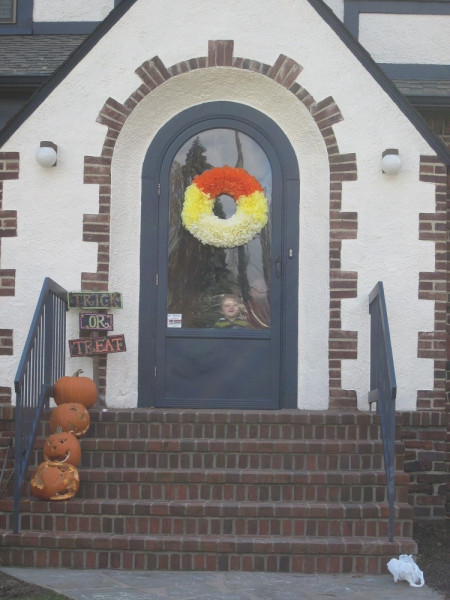 The carved pumpkins looked a little bit worse for wear. The bottom one especially but I'm not sure if it was gnawed by the local wildlife or if it was always a clusterfrak from the start. I'm told each of the kids had their own pumpkin and I dunno if they were actually allowed to participate in the design. That could explain the Piccaso-like nature of the end result.

You can see Morgan standing at the door waiting for me to come inside. 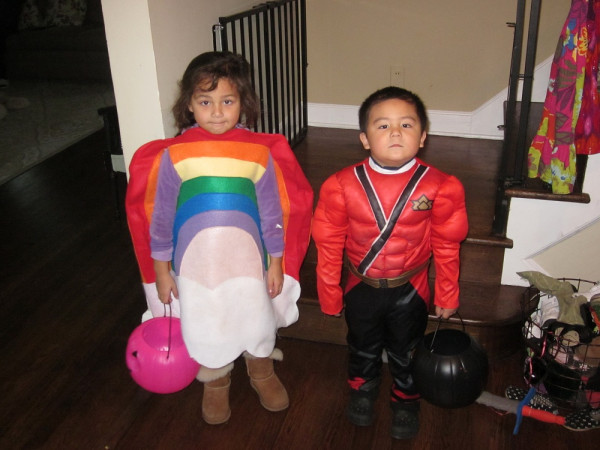 So here are Maddie and Will's halloween costumes. Connie actually made Maddie's costume from scratch, which I find pretty unbelievable. It's always amazing to me that she'll take the time out to do something like that when it would just be easier to buy something. At the least I figured she must've snagged a pattern or something but I'm told she did it freehand, which seems extra nuts. Martha Stewart Power, ACTIVATE! Will is dressed up as a Power Ranger, which is one of his favorite cartoons.

Sadly, I didn't get to see Morgan in her chicken outfit. She took her nap late that day so was sleeping when we ended up leaving for the Halloween celebration downtown. 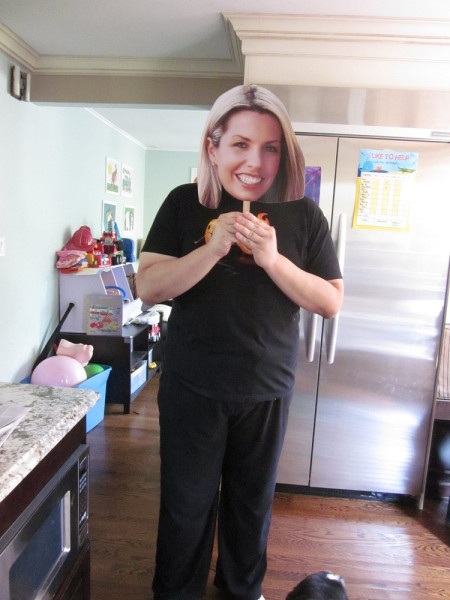 I also didn't wear my halfassed costume since I left my hobbit feet in the other car by accident. I did find this sitting though I had no idea who it was supposed to be a mask of. I don't recall now but I think it's some pop star. All I know is that Maddie told me her name but in one ear and out the other. The end result does look more than a little freakish given her head is gigantic. 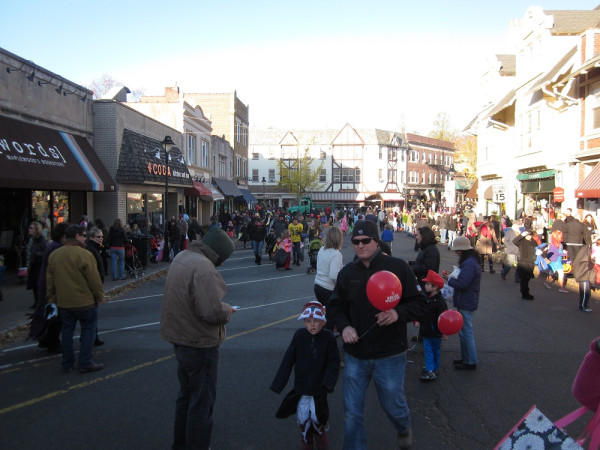 And this was the Halloween celebration. They apparently do this every year and all the businesses will pass out candy and other things. On one hand I think this sort of thing is pretty spiffy for kids, especially the younger ones. Everything is all in one place and you don't have to take them all over town. For the older kids, it just doesn't feel right. Part of the fun of Halloween when I was a kid was roving the streets in giant mobs of kids all seeking candy, fun, and mischief. Usually in that order. You can't help but feel this sort of orderly sanitized Halloween robs something from the holiday. 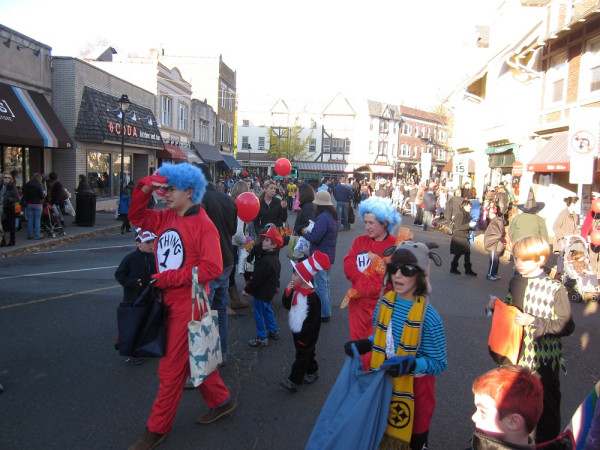 As you can see, the crowds were pretty huge with lotsa people in costumes. It's too bad that Morgan missed out since I think she would have been really excited by it all. Well, excited or freaked out, but either way it would have made an impression. I walked with Maddie and Will up one side of the main street and down the other, stopping for them to collect their loot at each stop.

It was kinda amazing that almost every storefront had someone there to hand out candy. You have to consider the fact that at this point, most of the businesses still didn't have power so they weren't actually open. This was sadly made apparent to Connie when she tried to hit up the local coffee joint and found there was none to be had. That said, almost all the stores opened just to participate in the Halloween day festival and pass out candy. That says something about the community IMO. 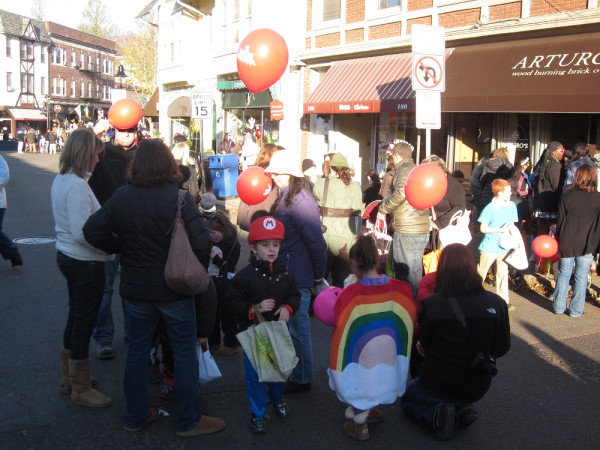 It actually didn't take all that long to make our way up and down the street, but since Connie knew many of the other parents there, there were impromptu meet and greets. The kids spent most of their time either adding to their candy collection or digging around in their buckets to figure out what they had managed to loot. 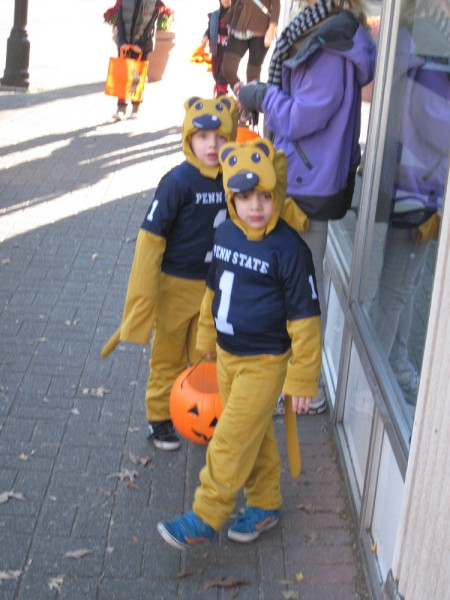 I snickered to myself when I saw these two kids in their Penn State costumes. This might not have been the best idea given some of the recent events there. Not that I'm sure Sandusky wouldn't have loved the costumes. 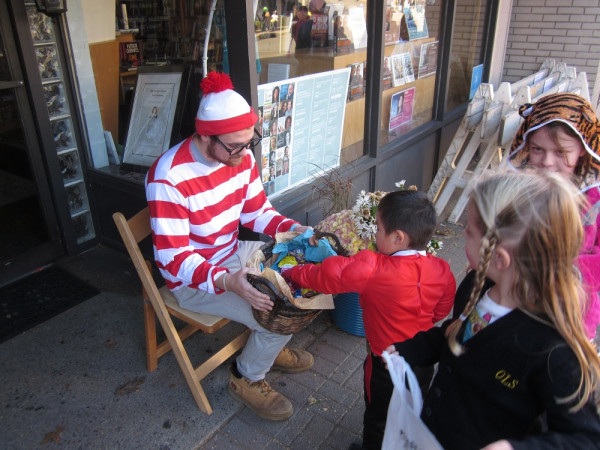 Here's Will getting some candy from Waldo. This was one of the early stops and he was wearing mittens that his mom had given him. This also meant that he could barely pick anything up with them. He'd spend a good minute at each store trying to get a piece of candy into his bucket. It was like watching someone try to eat with chopsticks for the first time. Eventually we just yanked them off and things went smoother. 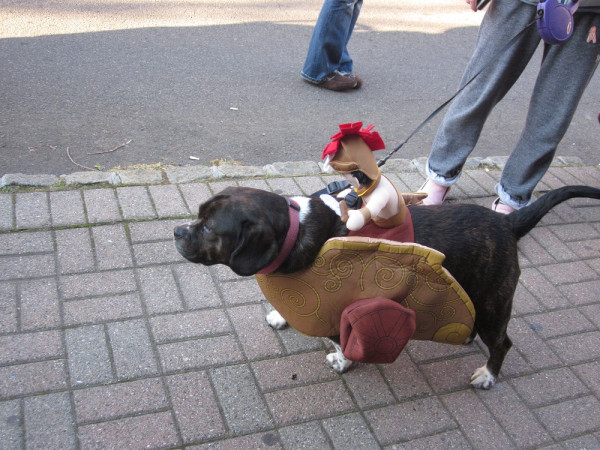 Even some of the dogs had costumes. I saw this and another dog dressed up as a hotdog. 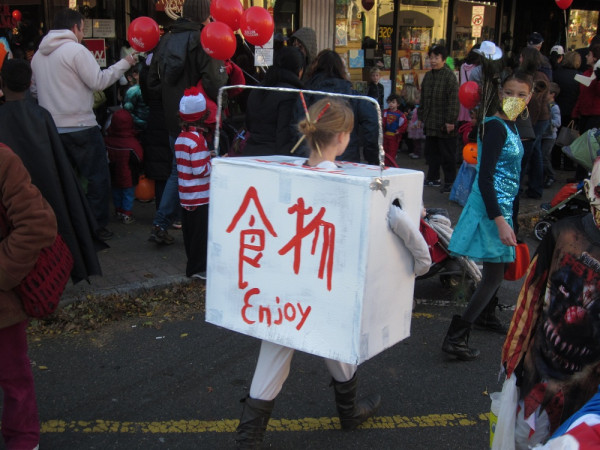 I really liked this costume. Wasn't able to snap a picture of the front though. I wasn't too diligent about grabbing pictures in general. I figured it might set off an amber alert if some strange guy was following kids around snapping pictures of them so I tried to keep it on the down low. 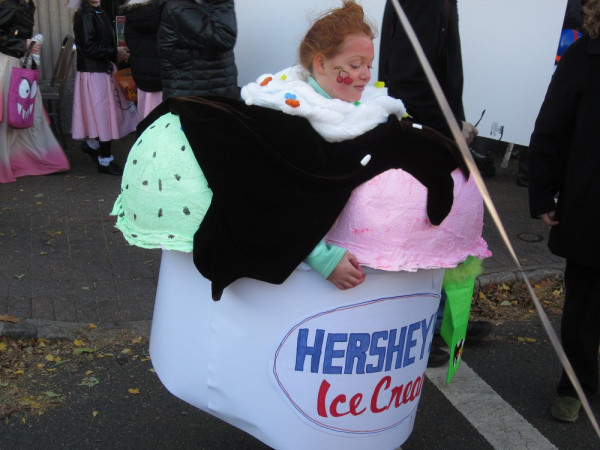 This was also a favorite. It's always spiffy to see some people go all out in making a costume. I might not be very craft'y myself but I always like to see what other people have managed to put together. 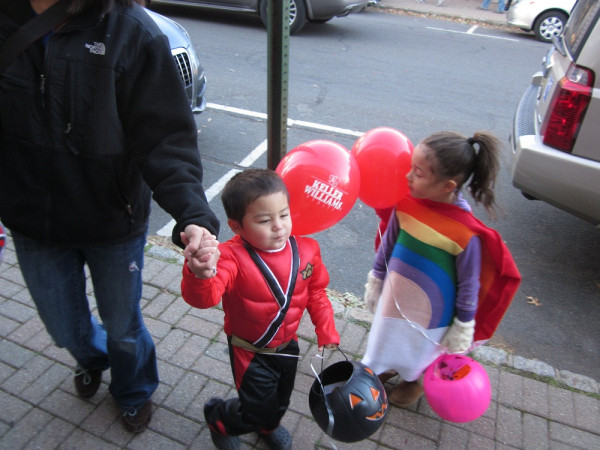 So by the end, both Will and Maddie managed to end up with a balloon each and a bucket full of loot. It took me a good while to get Will a balloon since the kids were mobbing the place handing them out and I had to use my superior height and reach to snag one. 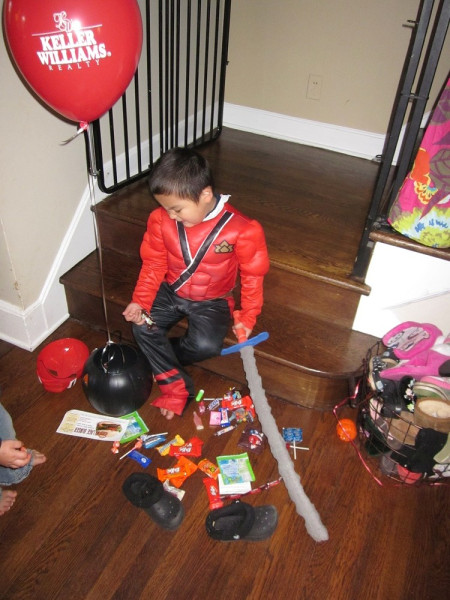 And here's Will with all of his vast treasure spread out before him. For some reason, he fixated on a box of pretzel sticks as the most valuable item. When Connie told him he could pick any one thing to eat, he immediately dumped everything out and went searching for it.

BTW, take a look at that sword of his. I bought him that a couple months ago and when I first saw it earlier in the day I was shocked. I didn't exactly recognize it because with the patterns on the side it looked like a kris blade, with its wavy edge.

It took me a bit to realize that he had simply bitten chunks out of the damn thing. Not that it doesn't look kinda cool the way it is now, but it always amazes me how these kids will just wreck and destroy their own toys. Maybe there is something to the idea that if you have too much of something you'll never learn to value it. I would have been overjoyed as a kid to have the smallest fraction of what Will and Maddie take for granted now. 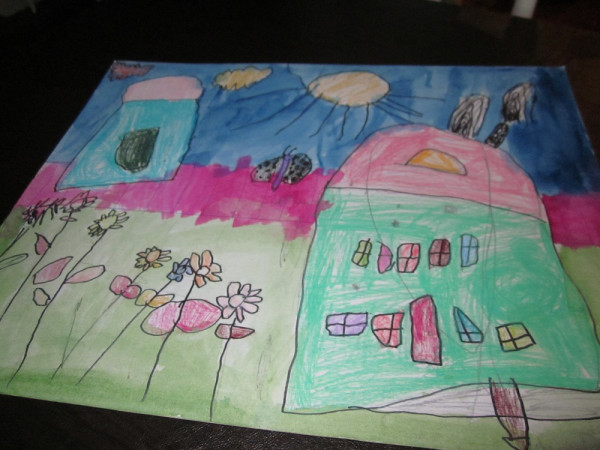 Oh, and here's one of Maddie's recent artistic endeavors. I dunno why but all of her drawings always give me the willies.
Collapse