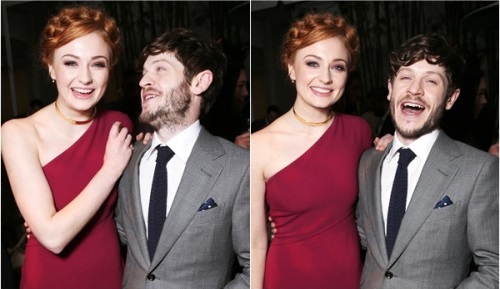 The long awaited moment finally arrived last night. Sure, I'm a year late but I'm sure if I could travel back in time there would have been squeals of glee as SNARKers all over the world celebrated the consummation of love between Ramsay Snow and Sansa Stark. Yes, that is what we Sn(ow)-(St)ark shippers have been waiting for and it was a thing of beauty. While this is the first time I've mentioned the glories of SNARKdom on the LJ, it's something I've been advocating on facebook since I finally decided to catch up on Game of Thrones again. I had watched up to the end of the 4th season in order to prepare for Killer Breakfast last year but had left it at that. I started the 5th season a couple weeks ago, and despite some pauses, I'm finally past the halfway mark. So far, nothing seems to have rocked my fundamental belief that Sansa Stark is quite possibly the stupidest character in the entire show and her and Ramsay are a match made in heaven. Neither one of them seems to have any redeeming qualities and of the two, I far prefer Ramsay. You can at least see his brain working, despite the fact that it seems to be slipping gears occasionally. I seriously doubt that Sansa has had an original thought her entire life, and no amount of harsh reality seems to convince her it might be wise to start using that space between her ears as anything other than a hat stand. In the long term, I'm not sure sure who would suffer more in their marriage as I think I'd much rather spend time with Ramsay (assuming there are plenty of guards nearby) than Sansa, seeing as he actually has a personality. It seems funny to me that for all the people who run around screaming sexism due to boobies or rapine don't seem to have any problem with the character of Sansa in and of itself. She is vapid, shallow, and empty. I spend at least half the time she's on screen pondering how someone that callow and clueless manages to walk and breathe at the same time. I'm always reminded of that scene from Adams Family Values.

So all hail the union of Snark. May their love help to bring each of them what they truly deserve.
Collapse