“LSD burst over the dreary domain of the constipated bourgeoisie like the angelic herald of a new psychedelic millennium. We have never been the same since, nor will we ever be, for LSD demonstrated, even to skeptics, that the mansions of heaven and gardens of paradise lie within each and all of us.”
-Terence McKenna Second verse, same as the first.

So the biopsy seems to have gone pretty well this time with no hitches. I won't know the results for a few business days, the nurses think about Monday, and I don't have another appointment with the nephrologist until 2 weeks from now anyway. I'm guessing the last time around they didn't fully give me the cocktail of night-night drugs because I remember feeling drowsy and dozed off for a bit, but I was able to fight it off at times. The recover was also swift on Monday where I felt good enough to pop out of bed almost immediately and walk around. This time was different.

Just like last time I basically was singing to myself in the cat scan room, working my way through a repetoire of various musicals. It's something I've done for years, usually whenever I was in a situation where I was trying to distract myself from pain issues. I would just start pacing around and singing. There was no pacing to be done this time but there was some anxiety to soothe so I just went with it. The nurses and doctors in the room seemed pretty appreciative as they hooked me up to all the various monitors and then strapped me down to the gurney on the cat scan machine. It turns out they had gotten right up to the end on Monday before the machine broke so I've had a bullseye drawn on my side for two days that I never noticed.

Anyway, they did all the preliminary scans again and this time without any sedation at all. Then the anesthesiologist came over and said that he was going to give me some of the good stuff now and that I would be feeling sleepy. As far as I can recall, I was in the middle of a chorus of Something There from Beauty and the Beast when I zonked out completely.

What happened next is a sort of a haze. I seem to remember something about fluffy blobs or maybe they were clouds and some sort of ring aparatus. I felt sort of free floating and then it was like I was being shoved back into my body. I got the impression of one of those Japanese mecha-suit animes where they slot the pilot into this huge robot exoskeleton. Clearly I hadn't been in my mecha for a while as everything went weird, like the controls didn't quite work right. I remember talking but it didn't sound like my voice and I sort of hand to do a slow, step by step inventory to figure out out if all my limbs were still there. I also basically felt like shit warmed over. My head ached and I couldn't seem to shake off the lethargy. All I really wanted to do was go back to sleep but I figured I should make an effort to try to throw off the remnants of the anesthesia, which ended up being easier said than done. I snapped the above photo after muttering to my mom I wanted my phone and clearly I am stoned out of my mind. It was not a pleasant sensation. I continued to feel like crap for quite some time. At some point I might have dozed off but my mom had apparently ordered a meal from the hospital for me. They had offered the same on Monday but I declined since I was still trying to keep to a severe calorie restriction and didn't want the temptation. I've been staying under 1,000 calories a day for the past week, trying to hew more to around the 500 mark. For the two weeks before that I doubt I was taking in more than 2-300 a day. I didn't get much of a choice this time around though as the meal arrived and they maneuvered me up into a position where I could eat it. 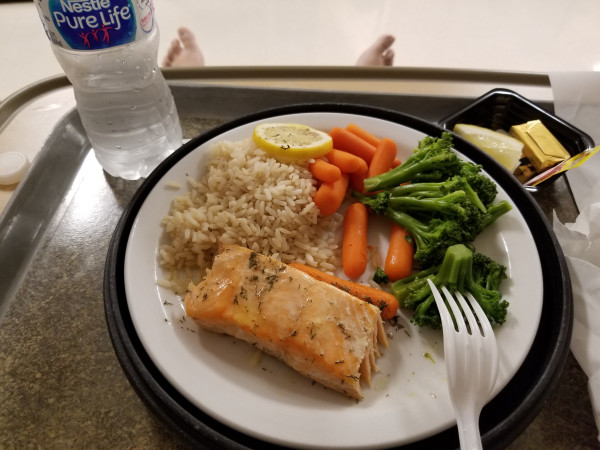 This salmon is so dry it makes the Sahara look damp, you donkey!
It was pretty egregiously terrible. I'm not a picky eater and I wasn't going to throw perfectly good food out but that first bite of the salmon practically choked me to death. I was lucky it was a very small bite and I was able to breathe around it while trying to get it to scrape its way down my throat. Initially, the best thing on the plate were probably the carrots and all they had done there was boiled water. Everything else went downhill from there. Adding a sprinkle of salt and the Mrs. Dash to the rice made things a bit better and though it took a long time I ended up shoving it all down.

My head was still spinning but they said they wouldn't be able to let me go until I had peed so I made an effort to wobble to my feet. I kept telling the nurses that I wouldn't fall, but I'm not sure if I was trying to convince them or myself. Even now, 4 hours later, my head _still_ feels wobbly and not screwed on straight. I managed to make my way to the bathroom and was happy to find I wasn't pissing blood or anything so there's a positive.

They kept me for another little bit and then said I could leave by wheelchair. In all the other times I've been discharged from various hospitals, they've all wanted to get me a wheelchair and I've turned them down each time. I figured it was probably the better part of valor to just give in this time around since my head was still doing loopdy-loops. Besides, the minute we started rumbling down the hallway I knew I was in trouble.... I managed to stagger out of the wheelchair and out the automatically doors just before Vesuvius erupted. Weird. I remember it being more of a pinkish color. Looks like the camera disagrees. It also felt and looked like there was a hell of a lot more in my memory too. Oh well, it's just as well I tossed it as this way the calories don't count against me. Maybe those bulemics are on to something.

Anyway, I ended up stumbling my way to the car and my mom drove me home. I'm still feeling a bit dazed all these hours after the fact and my head feels heavy. On the plus side, I would have had no clue that someone took a giant needle holepuncher to my guts if they hadn't told me. I've only just started to feel the barest twingey sensation from the puncture site and it's more awareness than any pain. I'm sure that'll change with more time too. No idea what the test results will show but at least this part of the shitshow is over. On to newer and probably even more terrible things....
Collapse