The only real things in life is the unexpected things. Everything else is just an illusion.
-Watkin Tudor Jones

Frankly, I could use a little less reality then since all the unexpected things in my life tend to be crappy. Everything had sort of slid into a new normalcy lately. All the tests had been performed and I was just pretty much waiting for the transplant center to do their thing and they were taking their sweet time about it. I had switched over from Our Lady of Lourdes to St Barnabas because the later was closer locationwise and they also do way more transplants every year. The downside is, well, they also do way more transplants in a year. It's a much larger program and whereas the people with Lourdes would follow up with me regularly, Barnabas is sort of like a black hole as far as communication and information goes. I hadn't heard from them for almost two months. They did finally give me a ring today and it rocked the boat a bit.

So, remember that cardiac stress test from a couple months ago that came back abnormal? I was a bit concerned at first, as I'm sure anyone would be told that there was disrupted blood flow to their heart and it likely indicated heart damage. My cardiologist pretty much waved it off though. He looked at my other test results and said it could simply mean the stomach or some other organ had obstructed the view and it was nothing to worry about. Since he was so blase about it, I figured it was nothing to worry about. Well, Barnabus said today that even with the cardiologist's clearance, their standard procedure at this point with that sort of stress test result and any prior history of diabetes would be to do a coronary angiography. They would inject a dye and basically visualize the blood flow through the entire heart and see exactly where any blockages or damage was. However, this dye, because of my compromised kidney function, would likely immediately send me into dialysis. That would clearly not be a good outcome so instead they're willing to add me to the transplant list so I can start accruing time but I can't actually be offered any kidneys. I mean, there's overall no functional difference since with a 5-7 year waiting list it's not like there was any chance I'd be offered a kidney anyway in the next several years. Still, it's sort of unnerving to know that the thing that my cardiologist blew off as unimportant was concerning enough to the transplant people to require more testing and worse, that testing would probably destroy what kidney function I have left. As if I needed one more ticking time bomb in my life.

So I guess the upside is I'm on the transplant list? It feels like a pyrrhic victory. The clock starts now but if we're all honest about it, it's pretty unlikely to downright impossible I can wait this out without dialysis at some point. No one like to guesstimate just how long it takes until GFR drops to a point where uraemia starts, but I haven't see anything to suggest 5 years is a likely reachable goal. I'll probably know more when my most recent blood test results from last week come back. Things have pretty much settled down from any large changes and I think that this blood test will give me an idea of what to expect as to just how fast my GFR is likely to drop over time.

On another front, my weight has been stable for a couple months now, hovering between 270 and 280. Ideally I think I want to drop another 20 pounds but it's been hard. I'm so far from where my 'normal' resting weight has been for decades that pushing more weight loss sometimes feels like you're rollinh a boulder uphill. Maybe it's good enough just to try to hold this line and my body will eventually adjust to feel that this is the new normal. I totally believe in the idea of calories in minus calories out, and that most other things that people believe about diets and food is just superstitious hogwash, but.....it's hard not to wonder sometimes if there's more to it. On a calorie counting standpoint I feel I should be doing a lot better than I am. I mean, look at this: 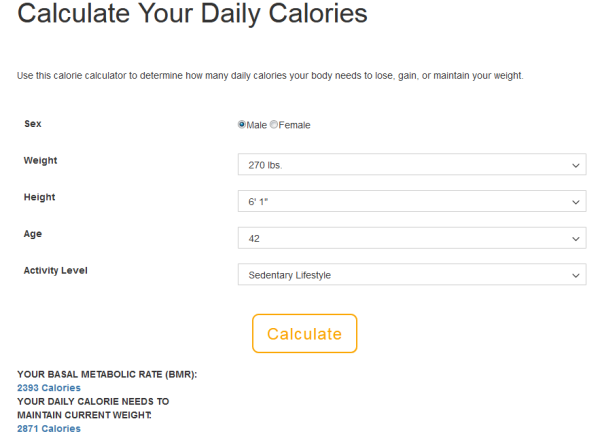 I'm sure that New Orleans set me back a ton, but still it's hard to believe that I'd be averging anywhere near 2800 calories a day. Most days now, I still try to keep things around 1200-1500 and even my slipups don't push past 2000. Either I've got a real math deficiency problem going somewhere, or something else is my proverbial wrench in the gears.