In the darkness the trees are full of starlight (

And all alone, I will follow the stars above...

Loneliness and the feeling of being unwanted is the most terrible poverty.
-Mother Teresa

I've been feeling lonely lately. Lonliness has never been about the number of people around you but if that's all it were, I have plenty of family that I'm with every day. It's just not the same though. There's always going to be that sorrow of knowing that to a large degree, family is there for you because they've been forced into it through years of compelled association. It's not like you can't break those bonds but it's hardly something you can hold up and say that it's proof your life had worth. Even Hitler had a mother after all. But Hitler also had Eva Braun. Sure, you can probably make a pretty convincing argument that she didn't exactly make the best choice there, but even he had someone who was willing to love him and entwine her life with his. Maybe we shouldn't put so much of our self-worth into what others think of us but that's the sort of self-congradulatory bullshit that works for those already secure in the knowledge that they're loved or at least have been.

I was thinking the other day how Mom was all interested in that whole making Katie my God-daughter a while back and maybe I should see how she feels about ghost-marriages. I remember seeing it on an episode of Bones or Castle or some similar show and apparently it's an old Chinese tradition of marrying people after they're dead, to another dead person or even a living one. Apparently the deal was that it was a means of securing a family's lineage if the line would otherwise have died with a childless son. So you find a nice young woman, marry her to your dead son, and then she adopts a child, preferably somewhat related to the family, and poof...you have a living branch to the family tree where once there was a dead limb. It was also apparently done to appease restless ghosts who parents and relatives worried would be lonely in the afterlife. 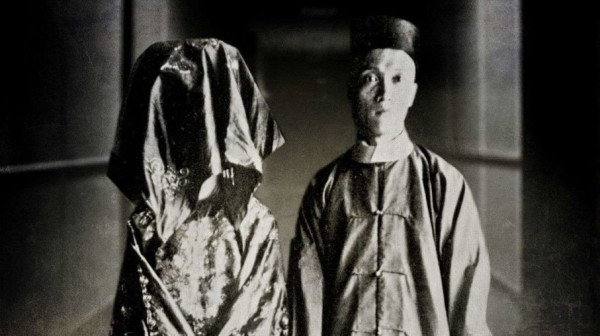 Dearly Departed, we are gathered here to join this man and this woman in unholy matrimony....
It's hardly an ideal situation but none of us know whether who's right about whether there's an afterlife or not. Wouldn't it be terrible to know that you end up roaming the earth as a ghost and that lonliness breaches the veil of death?

According to the BBC, these ghost marriages are still going on in the hinterlands of China. It's even led to a couple of murders since even all the dead girls are taken. There's really a bit of terrible irony in that.

'According to Huang Jingchun, the head of the Chinese department at Shanghai University who carried out a field study on ghost weddings in Shanxi between 2008 and 2010, the price of a corpse or the bones of a young woman has risen sharply.

I mean, that's a pretty hefty price tag but if you take the price and divide it across all of eternity, it's really quite reasonable on a per year basis. Maybe this was my mistake all along. I should be looking for unattached women in cemetaries and mausoleums. Better start soon since I'm sure that all of them will have suitors eventually since there are probably a billion other Chinese men out there.
Tags: blah, china, lonely
Subscribe