In the darkness the trees are full of starlight (

I know that there is pain, but you hold on for one more day...

I went to a gameday at Sarah and Brian's place today and mostly managed to not do any major caloric damage. I ended up eating half a slice of pizza and some bagel chips which I figure added up to around 250 calories for the day. It's never easy to ride the brake and I'm honestly not sure how long I'll manage it. When I got home I weighed myself to find that I'm now just a pound and a half from having dropped around 50. It just so happens that it's also been exactly 5 weeks (35 days) since I started this whole thing. That's a pretty impressive milestone, especially since I haven't really made any effort to exercise or increase my activity level. I'm sure that will become necessary at some point but for now, I'm just going to keep things going as is and see how far it gets me.

So I got home around 3 hours ago and had been lying in bed, dicking around on the computer. I started browsing some deal sites and ran across a thread about using chase pay and getting $20 off if you made a pre-pay order from one of their participating restaurants. Would you believe I actually placed an order, got dressed, and drove out to pick up an order of Singapore fried rice and a spicy curry fried rice? I even got a bit lost along the way since the google maps directions were erroneous and only made it to the restaurant 5 minutes before they closed. I just couldn't help myself even though I knew I wasn't going to eat it. I tried to push it to various people but no one was interested at that hour of night and so I popped it into the kitchen. I just can't resist a deal. That is going to be a major problem over time..... 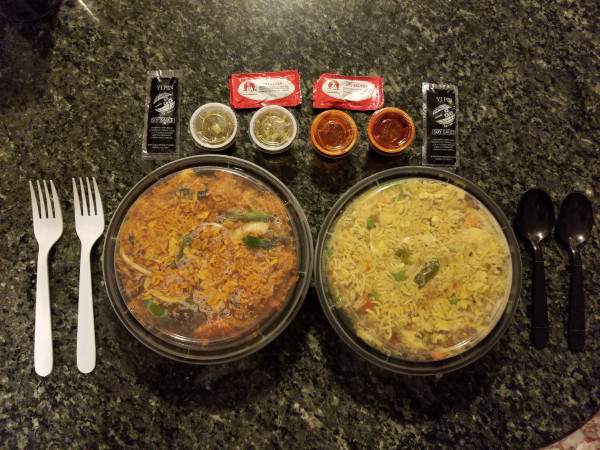 I've also discovered that if you ever decide you want to live forever, or at least feel like every day is passing interminably slowly, just severely food restrict yourself. You generally end up planning what you'll allow yourself to eat a day or even days in advance and then it's like you're watching the seconds creep by.
Tags: diet, willpower
Subscribe