I'm here at the computer munching sunflower seeds. I don't mind sunflower seeds but I don't usually bother with the shelled ones because it's a massive pain in the ass. The thing is, my mom has become hooked on them and there are sunflower seeds everywhere. So I decided to give it a whirl and have been munching my way through a handful when a thought occurred to me...you know how they say a panda spends something like 12 hours a day eating? Well, that's mostly because bamboo is a shitty food when it comes to calories and nutrition. It's practically the equivalent of being forced to eat nothing but rice crackers, though even that would probably be a caloric feast in comparison.

So I kept thinking and started wondering what if a person could only eat sunflower seeds? Those are far more nutritionally rich than bamboo but it takes some time to extract them from their shells. It's kinda like how you see gorillas fishing for termites with twigs. How much time would the average person have to spend eating if all they could eat were sunflower seeds in the shell? Obviously we're not talking a fully balanced diet here and God only knows what sort of sicknesses you'd come down with eating nothing but sunflower seeds, but just to meet your caloric needs.

Most stupid ideas you entertain for a short bit but then toss away. For some reason I got it into my head to actually try this. I went downstairs and started rummaging for a measuring device. I was hoping for a 1/4 cup or maybe even a tablespoon, but all I could find was a 1 cup measuring container. 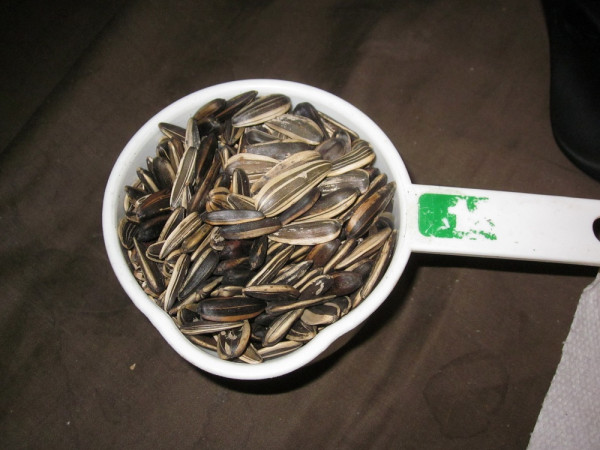 So I scooped up a cup of sunflower seeds and retreated back upstairs to count them. I counted out the whole lot into another container and it was hardly a fun time. In case you were curious, there were 430 sunflower seeds in a cup. There were also 5.75 (Yes there was a half and a half of a half in there) already shelled seeds in there. If we add it in and do some rounding, we get 436 sunflower seeds per cup.

Now, according to online sources, a cup of sunflower seeds have 268 calories. This means that each seed has a caloric value of .62kcal. Then it was back to the internet to figure out how many calories the average person consumes in a day. This was easy enough and revealed the following information:

Women have a smaller average range of calorie intake than men. The smallest average requirement for women age over 60 is 1,500, whereas women between 18 and 59 usually consume 2,000 calories a day. The overall average daily intake for U.S. women 1,888 calories.

So I guess by this, since I am a 36 year old male, I should be downing 2,800 calories a day. In this little experiment it would mean that I would need approximately 4,516 sunflower seeds to meet my daily caloric requirements. First of all that sounds like a literal fuckton worth of seeds. I'm starting to feel sorry for those damn pandas.

Next, I need to find out just how many sunflower seeds I can shell and consume over a period of time. So I give it a whirl, testing myself a few times over the course of a minute. I wasn't racing but was methodical in grabbing, shelling, consuming, and then repeating the procedure. My results showed that on average, I could shell and eat 11 sunflower seeds a minute. I might have been faster if I had used both hands, but I only have one mouth so there's still a limiting factor.

At 11 seeds a minute, it would take me roughly 410.5 minutes, or 6.8 hours to consume the 4,516 nuts I would need to maintain a normal caloric intake. Mind you, this would be 6.8 hours of doing absolutely nothing else but concentrating on shelling and eating. My seed of consumption while dicking around on the internet probably falls to 2-3 seeds a minute or so.

So there you have it. If you were ever interested in life's big questions, like how many sunflower seeds are in a cup (an answer I couldn't freaking find an authoritative answer on from google) the answer is 436. And if you ate nothing but sunflower seeds, you would have to eat for 6.8 hours a day. Women would apparently having an easier time of it needing only 4.6 hours, but they'd probably just waste the extra on makeup or their hair or whatever it is that women do. 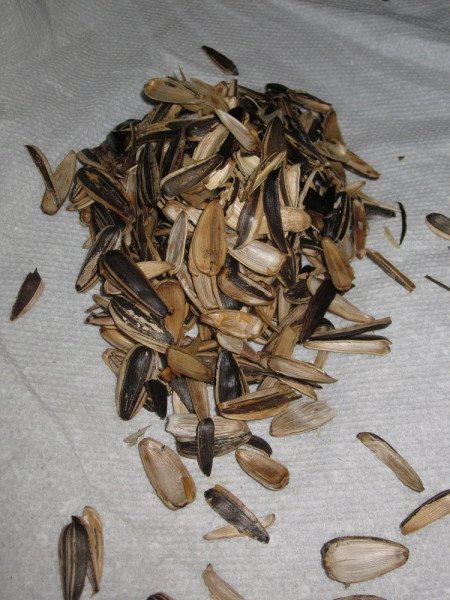 If I'm going to meet my quota for the day, this pile is going to have to get a lot bigger.

I am bored out of my mind right now. Of all the things that I could do, I don't wanna do any of them. I'm thinking I might have to just dial random numbers into the cell phone and see who answers. Like, who would have the number 867-5309 in each area code? How many do you think would really be named Jenny?

I is bored. BORED.


Don't you hate it when you find an entry on IMDB but there's no useful information?

I think I would like to watch A Peanus Christmas Special. Too bad it looks like it's not even out yet. It might have been a boredom killer.


Turns out it is available.

Lets watch it together.


Lucy was never even close to being that fucking hot. I wonder if she's going to pull his balls away now.


Doh. Sort of hit that one on the nose.


You sometimes have to wonder why Charlie Brown didn't just go on a rampage killing everyone.

Life is a really funny thing sometimes. The past few days I've been bored out of my mind, which is sort of unusual for me. Despite having an incredible amount of time on my hands, I haven't spent much of the past few months bored and I finally realized why. The new steroid meds have provided me a level of relief from unremitting agony and the net effect of that is boredom. It's amazing how much pain can occupy your thoughts as it's churning away. Now that I'm having less problems, my mind is free to complain there's nothing to do. How's that for irony?

The really remarkable part is that I haven't really experienced much boredom in like the past 6 months or so, ever since I had this downturn start. It's one of those feelings that can only creep up on you when most of your general needs are satisfied and there's no much going on. At this stage, I'm going to have to find a new hobby, activity, or something before I end up driving myself nuts.

Who wants this icon? :P

I'm looking at you,

I need a new hobby of some sort. It seems like everything lately is just boring the heck out of me. None of the forums I'm on are of any interest, I'm tired of writing in this blasted LJ, there aren't any interesting news stories, I'm sick of running demos for game companies, etc. I need something new. I don't feel like reading, I don't feel like watching tv, there are no movies I want to see, downloading anime is becoming a bore....blah. I'm about ready to give homocidal mania a whirl.
Collapse